And By The Wind Grieved | Karen Bondarchuk

And By The Wind Grieved
Karen Bondarchuk 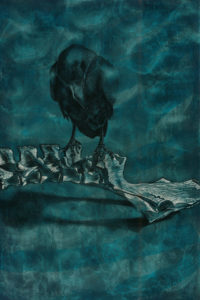 Who are these animals, their lights gone out? What journeys have fallen apart here?
Barry Lopez, “Apologia”

Over the past two years, Karen Bondarchuk has found more dead birds than at any other time in her life. She reflects, “I’m not sure why – whether I am paying closer attention to the ground when I walk, or if I somehow attract these delicate creatures – but instinctively I feel a deep responsibility to honor or commemorate the life that was. Drawing these birds on gessoed, cradled boards has for me become a means to substantiate their fleeting existences.”

The works in this exhibition, since they are collectively rather mortuary in nature, represent something of a shift in emphasis for Bondarchuk. In general, her work of the past several years has been focused more closely on common thematic elements of animals and language, examining linguistic and physiological connections between animals and humans. Language happens to play a central role in the human-animal divide, often serving as the singular distinguishing trait that elevates “us” above “them” (despite the fact that they communicate with vocalizing of their own).

While scientific perspective on the nature and magnitude of animal consciousness is in flux, the most recent research suggests that animals are capable of higher-order reasoning than previously understood or imagined. Chief among those creatures at the cutting edge of scientific scrutiny are corvids (mainly crows and ravens, but also including jays, rooks, choughs, jackdaws, among others). “The magnitude of their acuity never ceases to astound me, and I am ever inspired by the Darwinian notion that difference in human and animal intelligence is a matter of degree and not kind,” Bondarchuk states.

During the time period in which she was exploring such interests in her studio, she watched her mother rapidly diminish with Alzheimer’s disease. “Without realizing it initially, I began to conflate the work in my studio with my mother’s deterioration. Her physical and cognitive decline over a period of seven years was such that she was incapable of speech, mobility and simple motor coordination, and yet she still communicated – a smile, a knowing glance, a heavy sigh – without language.”

The work in this exhibition is an attempt to encounter, to grasp after visually, something of the complexity of humanness and life – of being a mother, a daughter, a mammal – which includes the unsettling knowledge of mortality, but levity as well. It is also about the deep connections between present and past in which Bondarchuk finds both solace and a profound sense of disquiet.

Remembering speechlessly we seek the great forgotten language, the lost lane-end into heaven, a stone, a leaf, an unfound door. Where? When?

This work was supported by funds from Western Michigan University’s Faculty Research and Creative Activities Award and a Frostic School of Art Faculty Development Grant. 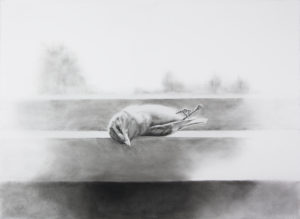 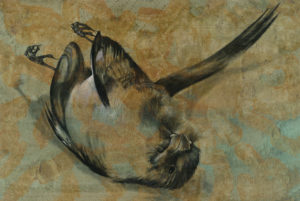 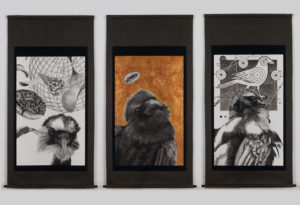