The featured works in Spanish Prints, 1952-1987, on temporary loan from the New Visions Gallery, are collections of lithography prints by Joan Miró and Antoni Tàpies. Also included is work by Antoni Clavé, Chema Cobo, Sunol Alvar, Juan Romero and a lithograph by Pablo Picasso.

Miró, Picasso, Tàpies & the art of the lithograph
Lithography is the art or process of producing an image on a flat, specially prepared stone or other surface, treating the items to be printed with a greasy substance to which ink adheres, and taking impressions from this on paper. Lithography printing is a very versatile printing technique and artists can use the medium to suit the needs of their particular style.

Lithography was one of the two types of print-making Miró used to create his prints. Collaborations with master printers and innovative workshops yielded remarkable editions that set new standards for original prints. Although Picasso is known as the greatest painter and most innovative sculptor of the 20th century, he was also its foremost printer. He used traditional techniques with imagination and obtained results that had been deemed impossible before his successes. Tàpies made printmaking one of his central activities and his prints have always been recognized as a major part of his work. His works of lithography were noted for their cryptic, spontaneous effects.

Connections
Miró, Picasso and Tàpies were each a young, emerging talent seeking to develop a unique visual language, and each looked to the past in order to invent the future. All were all raised in Catalonia in Spain and were influential in Barcelona’s modern art movements and organizations. All three lived in France for a period of time—In Paris, Miró met and became great friends with Picasso, and Tàpies met Picasso there in 1950. In fact, when Tàpies was recovering from a lung infection contracted in 1940 he spent his time making copies of Picasso’s work, and in 1983 he completed a public monument to Picasso in Barcelona. Miró and Tàpies also became friends and Miró was a decisive influence on Tàpies’ earlier surrealist work. Each of the three artists was inspired by what they called the “primitive” art of children, and all made innovative contributions in the graphic arts. 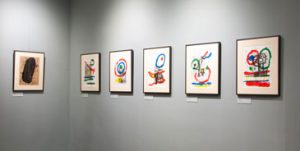 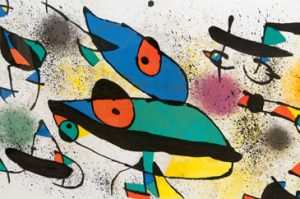 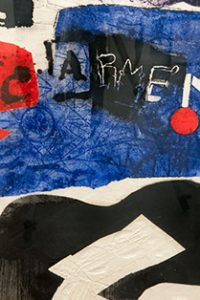