“It’s always collaboration when making a woodcut: the tools, the wood and me working together.” –Jeanine Coupe Ryding

In March of 2016, Jeanine Coupe Ryding began carving some images in wood blocks. After a quick, loose sketch on the block, she used her carving tools to make lines, marks and spirals into the surface. The wood was birch plywood and difficult to carve. So the marks became smaller as though the tool was taking a bite out of the surface. Ryding used a Dremel tool make the spiraling, sweeping lines that a carving tool could not in the hard surface.

“The shapes I carved had been on my mind for years. They are a medley of things I have seen and then simplified, a shield, a toy, a spear, and a barrel.” Ryding was thinking of them as drawings for sculptures, three-dimensional forms that could lie on a low pedestal or in the grass or balanced upright. The marks on the inside of the shapes, however, are graphic and make the shapes come alive with motion and depth. The lines, dashes and spirals create a three-dimensional appearance of space allowing the illusion of the third dimension and fulfilling, in part, her desire for sculpture.

In Ryding’s effort to leave out color and concentrate on marks and forms, she printed the wood blocks in Prussian blue. Although it is a color, it works like black in contrast to the light tone paper without the severity or finality of black. The blue also gives the appearance of a night sky viewed through an opening and mapped in lines and dots suggesting orbits and paths of motion. She went through multiple cans of Prussian blue ink as she carved more blocks and explored their two- and three-dimensional possibilities.

About the artist
Jeanine Coupe Ryding’s work has been shown throughout the U.S. and abroad and her prints and artists books are in museum collections. She focuses primarily on woodcut prints, etchings, artist’s books, drawing and collage and founded both Shadow Press and Press 928 in Evanston, Illinois for artist’s books publishing. She received her Bachelor of Arts degree from The University of Iowa and her Master of Fine Arts degree from Universitat der Kunste, Berlin, Germany. Ryding has received various awards and residencies, including the Illinois Arts Council Award, Arts Midwest, Frans Masereel Center, Belgium and Anchor Graphics, Chicago. Her work is represented by: Atrium Gallery in St. Louis, Olson Larsen Gallery in Des Moines and August Art in London. Ryding has been teaching at the School of the Art Institute of Chicago since 1991. 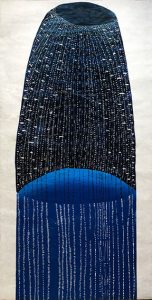 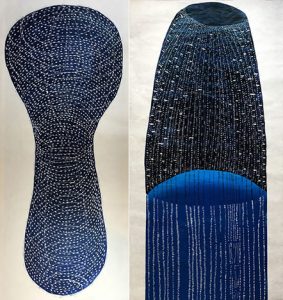